The fence along our driveway has been on borrowed time for years.  Whenever we had a windstorm, it would whip and shake.  We would joke that the only thing holding it up was the bamboo growing on either side of it.

So this was going to be the summer that we (and of course by “we” I mean Chris) finally replaced it.

But I had mixed feelings.  I loved the weathered look of the old fence.  New wood just wouldn’t be the same. 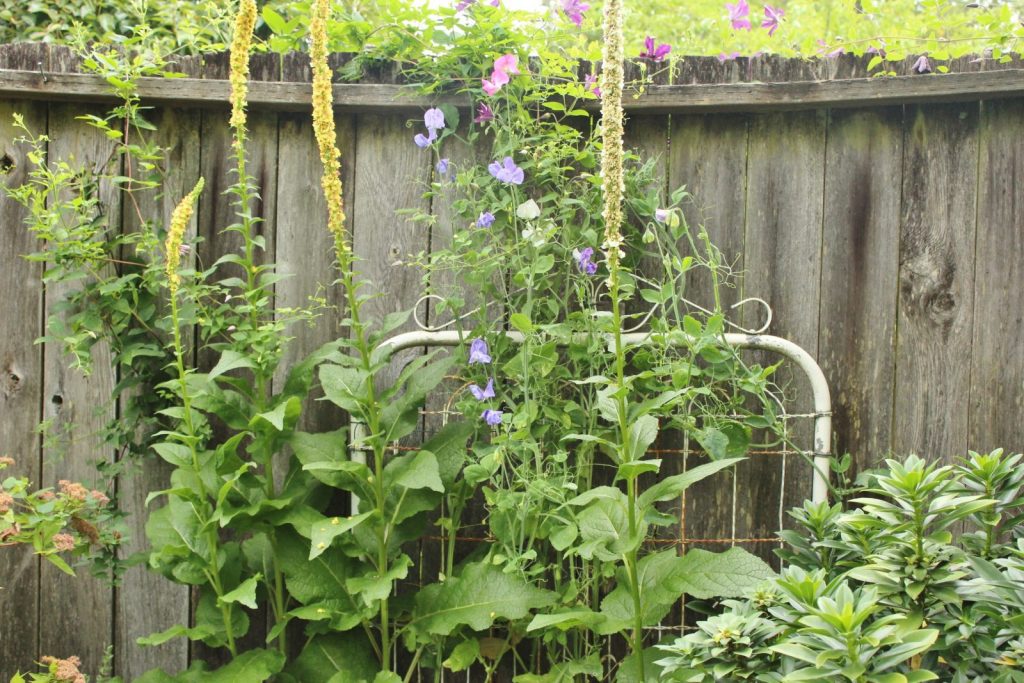 Happily, Chris and the neighbor we share the fence with decided to take an Earth-friendly (and budget-friendly) approach by rebuilding it instead of replacing it.  They only replaced the posts and runners that were rotted, but they re-used the old fence boards – at least those in good condition.

Usually DIY projects wind up being more difficult and time-consuming than expected, and this was one of those rare cases where the opposite happened.  And the best part, as far as I’m concerned, is that the fence still has that rustic patina that I love.

Of course, to access the fence, some of the bamboo growing on the west end needed to be removed – a lot of it in fact.

And it looked so beautiful.  Some of it was gorgeous black bamboo.  I removed the branches and left the canes. We gave some away and kept some. But what else could I do with all this bamboo?

I was a little obsessed with the black bamboo, although I’ve been told that most types fade after they dry – just like other bamboos.

But I wanted to use it anyway to make a little trellis for a jasmine vine growing in a 10-inch pot.

I used my sewing pattern cutting board to space the canes exactly as I wanted them, and then I marked them with a felt pen for assembly later. Then I suspended the vertical canes between two chairs and used Super Glue to attach the horizontal canes.  The Super Glue was not intended as a permanent adhesive – only as a way to hold the canes in place until I could tie them together.

Tying them together, as I learned, is called lashing.  I found this helpful video and, after practicing a little, this method of lashing became etched into my muscle memory.

But the whole thing was going too smoothly, so I had to complicate it.  Instead of the waxed lashing cord used in the video, I decided to use the caning material I already had on hand from the time I revamped four rattan chairs. I’m sure the caning material was not nearly as easy to work with as lashing cord would have been.  But I think it gave the trellis a fun look. It will be interesting to see how long the black bamboo actually stays black.

Now that I knew how to tie lashing, there was no stopping me.  But for my next project, I would keep it simple and use plain old jute twine.

Last fall, I planted some dahlia tubers that my neighbor gave me.  I didn’t expect the plants to do much in their first year, but they have exploded.  By the time I realized they were getting out of hand, it was too late to stake or cage them without doing more harm than good.

So I decided to make a little bamboo fence to hold them back from the walkway.

I built the fence in place. I pounded three 36-inch canes into the soil, spacing them about 23 inches apart.

Then I used garden tape to suspend the horizontal canes from the vertical canes on either side while I tied them.  I made sure everything was level and evenly spaced.

A half hour later, voila! I have plenty of bamboo left, so I’m looking for ideas.  If you have a good bamboo project, leave a comment and tell me about it. 12 Replies to “What To Do With All This Bamboo”